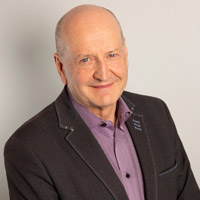 Randy Lennon is a 44 year innovator, entrepreneur and author who has founded and built successful enterprises in the fields of newspaper publishing, television and radio, recording artist management, retail, advertising and marketing, corporate finance, and the Internet. Randy has also worked as a police officer, regional and national television and radio talk show host, co-starred with the late Fred Willard in a situation comedy pilot, and worked as a special advisor to the leader of a major national political party in Ottawa. His recording artists have won US Gold and Platinum Albums as well as the Juno Award in Canada.

Randy recently published his first book, The Dirty Words, which is the official companion book to The Questions Experience.

As Chairman of the Privatization Committee of the board of directors of Access Television network, Randy oversaw the first successful privatization of a public television broadcaster in North America.

His crowning achievement in the area of serving others was the development of “The Biz Brainstorm” workshop and radio show series in Vancouver that garnered Randy back-to-back nominations for the prestigious Ernst and Young Entrepreneur of the Year Award.

Randy Lennon spent 16 months as an executive with The Calgary Flames. On the ice the team went from seven years out of the playoffs to Western Conference Champions and Game 7 of the Stanley Cup Final. On the business side the team went from heavy losses to significant profitability over that 16 month period.

Working with the lead investor who pulled together a group of 36 owners to keep the NHL Edmonton Oilers in Edmonton in 1992, Randy years later led Meridian in securing local equity that facilitated the 2008 acquisition of the Tampa Bay Lightning, and then in 2013 Meridian also structured the deal and arranged financing that facilitated the purchase of the Arizona Coyotes by a group of mainly Canadian investors.